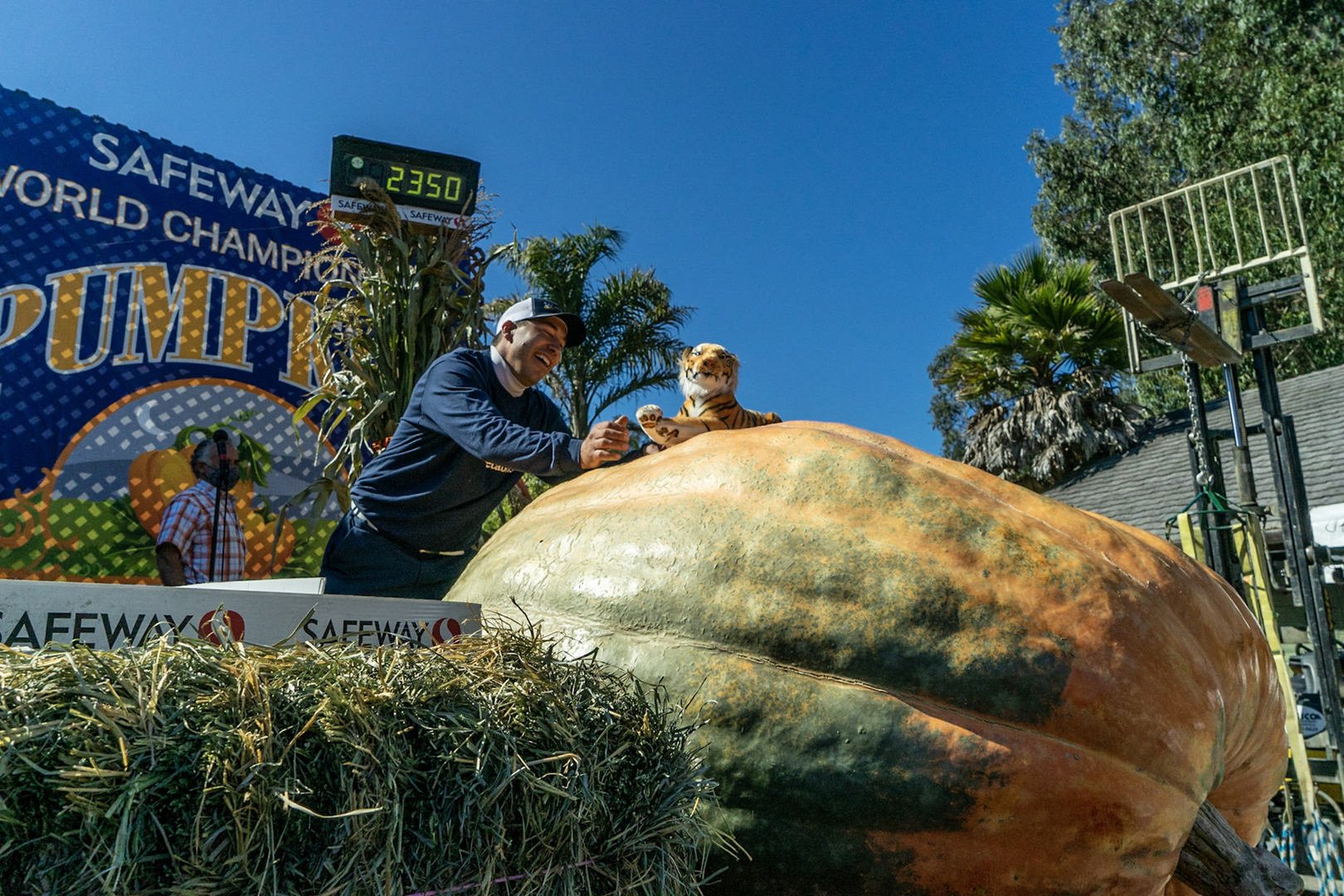 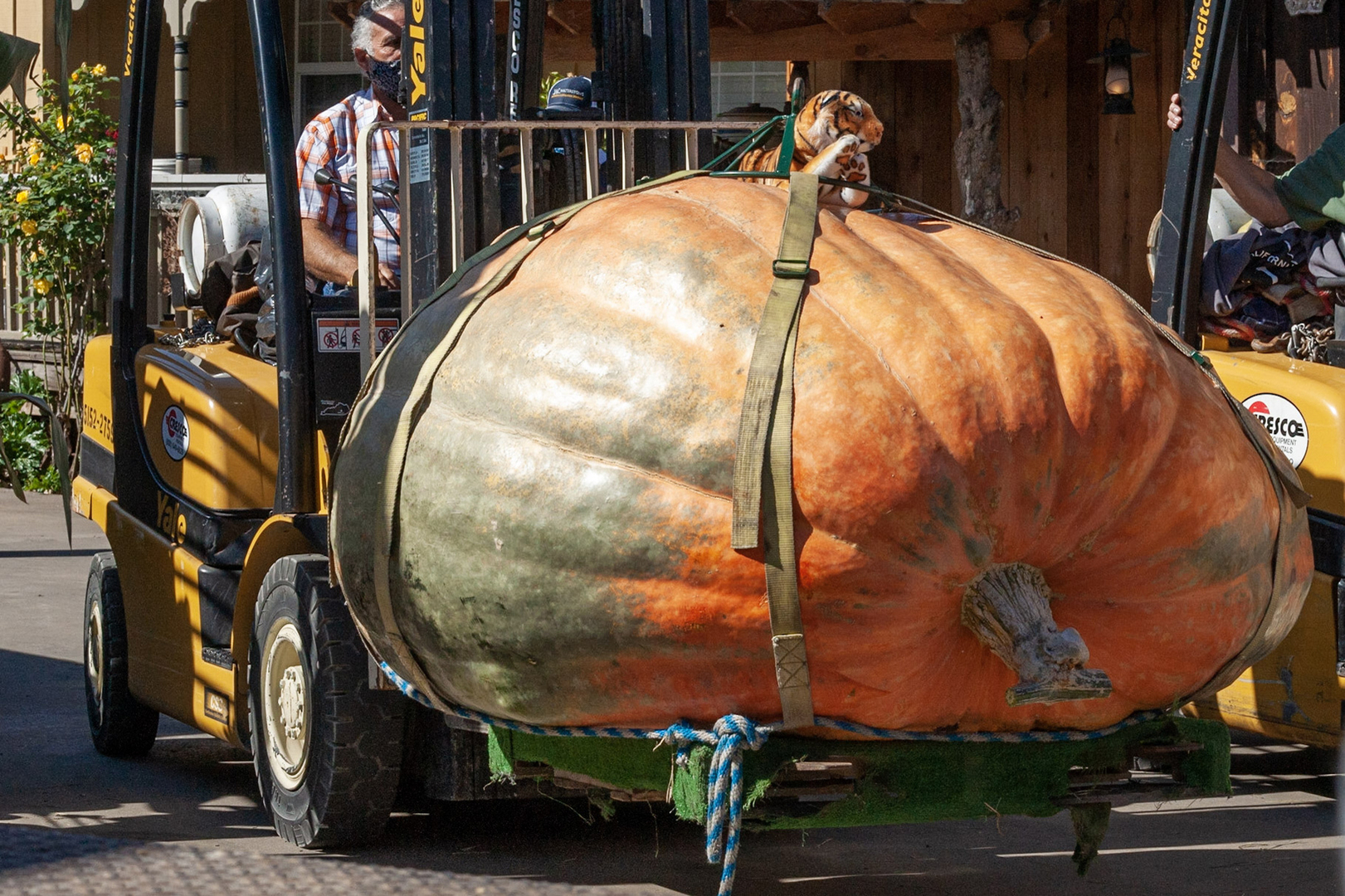 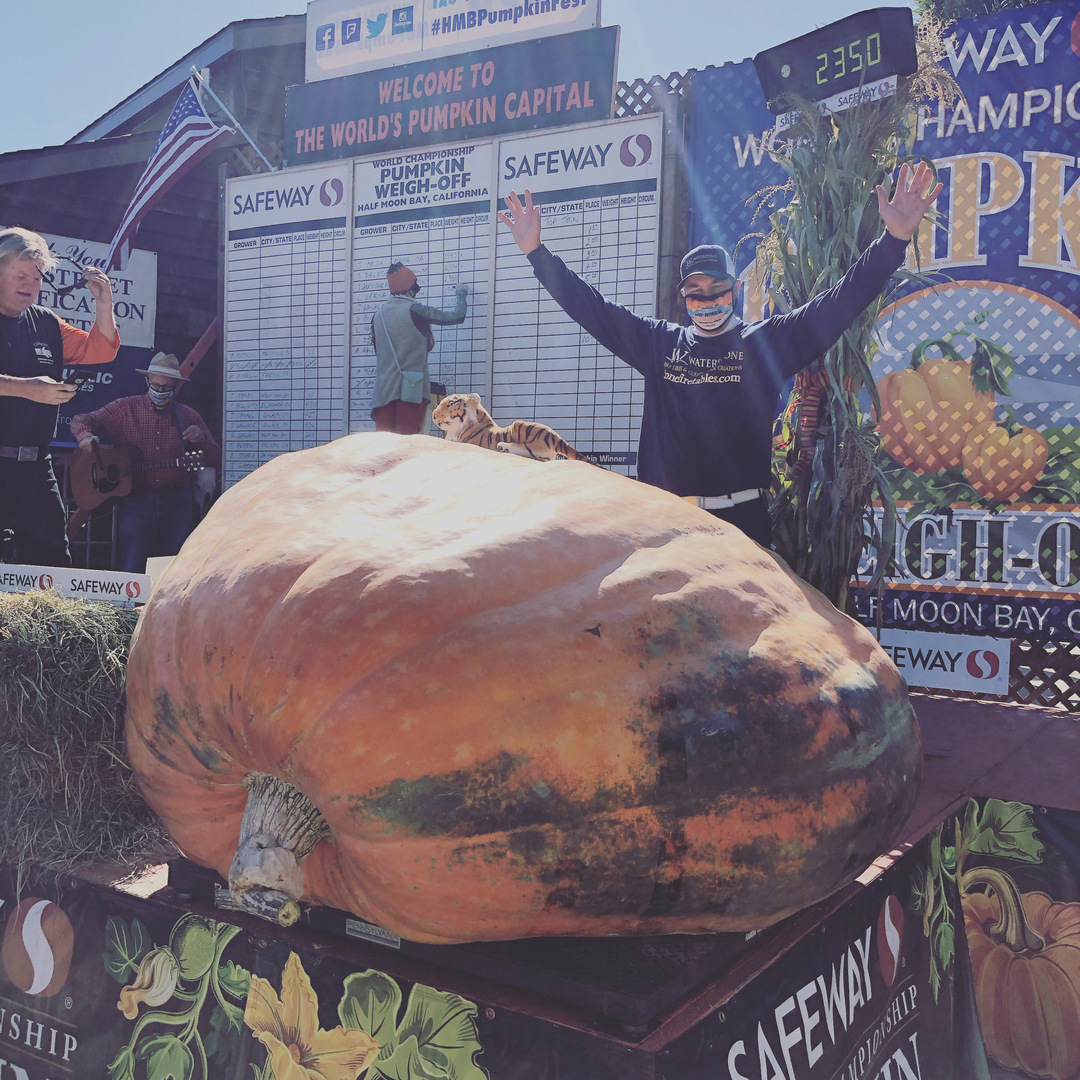 No weigh? Weigh! Bring it on burly, beefy, bodacious behemoths! The excitement is building in Pumpkintown as the World’s Greatest Gourd Growers and their mind-blowing, Volkswagen-sized orange orbs hope to squash the world record on Monday, October 11 at the 48th Safeway World Championship Pumpkin Weigh-Off — the “Super Bowl of Weigh-Offs” — in the World Pumpkin Capital of Half Moon Bay, California and and this year organizers, in association with title sponsor Safeway, are upping the ante big time to celebrate the world’s greatest gourd growers. The world’s biggest top prize has been increased to $9/pound (from $7/pound) for the 2021 weigh-off champion. Also at stake are thousands of dollars in super hefty prize money doled out to the top 20 plus the big carrot: a $30,000 total mega-prize for a new world record pumpkin entered at Half Moon Bay. The weighing of pumpkins will begin around 7am and anticipate ending the weighing around 11am followed by the awards presentation and luncheon. Defending champion Travis Gienger's rhinoceros-sized 2,350-pound mega-gourd (named Tiger King) handily won the 2020 Safeway World Championship Pumpkin Weigh-Off in Half Moon Bay CA. It was the heaviest pumpkin weighed in North America in 2020. Beauty will share center stage with beefy brawn — a special $1,000 prize will be awarded to the “Joe Cotchett Family Most Beautiful Pumpkin”. Additional special bonus prizes include: Biggest California Pumpkin — $1,000; Biggest Coastside Pumpkin — $1,000. Using forklifts and special harnesses, the gargantuan gourds will be carefully placed on a 5-ton capacity, industrial-strength digital scale under the watchful eye of officials from the San Mateo County Agricultural Commissioner's Office of Weights, Sealers, and Measures. Half Moon Bay’s Weigh-Off will serve as an officially sanctioned Great Pumpkin Commonwealth (GPC) site. Spectators are welcome to attend. Admission is free. COVID PANDEMIC RESTRICTIONS: • The health and safety of our participants, their families and event staff is our top priority. We will be following all safety and sanitary precautions as recommended by the CDC and San Mateo County Health Department at the time of the weigh-off. LIVESTREAM ON FACEBOOK: Follow the weigh-off Livestream on Facebook https://www.facebook.com/halfmoonbaypumpkinweighoff/ OFFICIAL RULES: • This event is open to growers of giant competition-sized pumpkins only. • Pumpkins must be grown, cared for, and entered by the weigh-off contestant. • Each contestant is limited to one entry. • Pumpkins that have won prizes in any other weigh-off competitions are not eligible. • In the event of a tie, prize money will be distributed equally among the tied parties. • Decisions of the judges are final in all cases. •Pumpkins must be in healthy and undamaged condition, free of rot, holes and cracks through the cavity, chemical residue, and soft spots. •To be classified as pumpkin, specimen must be 75% yellow/orange in color; all others will be classified as squash. •The vine must be trimmed to one inch from the stem. No foreign material is permitted in the weighing. •All pumpkins will be weighed without the use of tarps or other carrying devices. •Pumpkins will be classified by division based on where the specimen is grown, not the residence of the grower. •The weigh-off will be conducted in accordance with GPC rules. DELIVERY OF ENTRIES: Growers are responsible for bringing their entries to the weigh-off by 7:00 a.m. Weigh-off staff will move using brute strength manpower, special harnesses and forklifts. ALL entries will be handled with care. WORLD'S BIGGEST TOP PRIZE – $9/Pound 1st place prize money will be awarded in a “pay-by-the-pound” system with the champion receiving a hefty $9 per pound. WORLD RECORD MEGA-PRIZE – $30k The Safeway World Championship Pumpkin Weigh-Off is offering a special $30,000 mega-prize for the world record breaking pumpkin at the prestigious Half Moon Bay event. To receive the $30,000 mega-prize, the grower must break and hold the world record at the conclusion of the Half Moon Bay weigh-off. If two or more growers happen to break the world record at Half Moon Bay, the prize money would go to the grower of the heaviest pumpkin. The current world record heavyweight champion pumpkin is 2,703 pounds held by Stefano Cutrupi of Italy just set in late September, 2021! Magnifico!! Here's how the $30,000 breaks down: the winner receives a world’s biggest $9 per pound plus plus the difference to get to a total of $30,000. MEDIA AND SPONSORSHIP CONTACT: For press and sponsorship inquiries and assistance, please contact Tim Beeman, CEO of Miramar Events 415-999-2428 (mobile) or tim@miramarevents.com
Official Festival Website: https://go.evvnt.com/905060-0 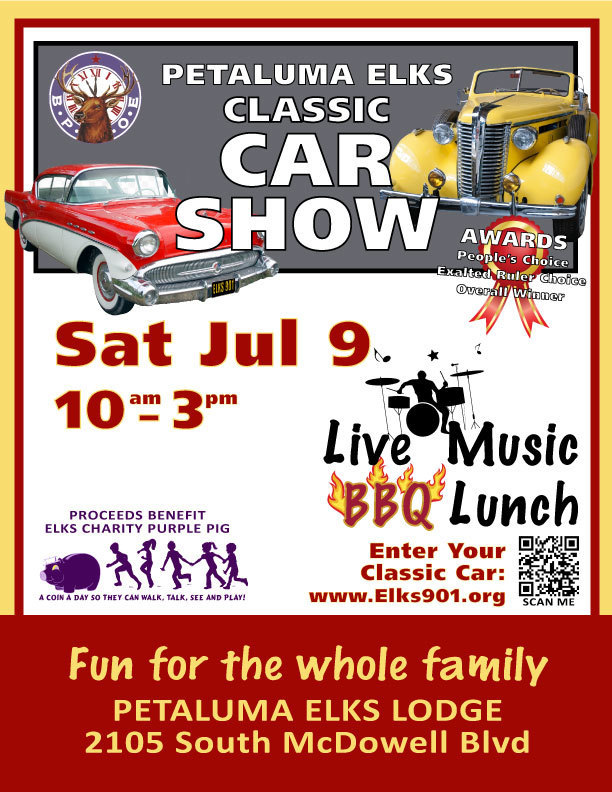