Ken and Drew of Sister Hazel 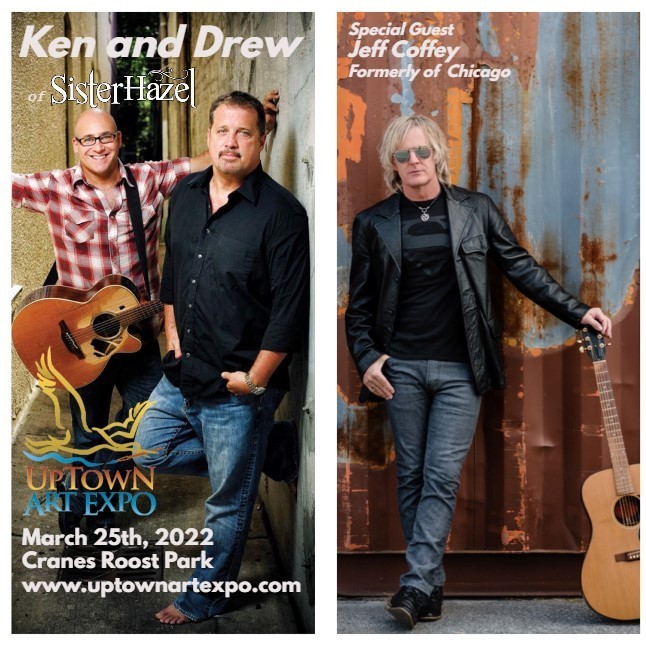 Ken and Drew of Sister Hazel

Celebrate the Arts and Live Music at the 9th annual UpTown Art Expo at the Cranes Roost Park Amphitheater. Our Kick-Off event will feature Ken and Drew of Sister Hazel along with special guest Jeff Coffey former lead singer of Chicago. Ken Block and Drew Copeland, best known as two of the five members of the platinum-selling southern rock band Sister Hazel, will bring their wildly successful tunes for intimate, "miss it and miss out" acoustic shows, reminiscent of their earlier performance days when they canvassed the club and coffee shop circuit as a duo from Gainesville, Florida. While performing over 100 shows each year with the band, Block has long been praised by both media and fans alike for his powerful and emotion-evicting voice which is both unique and instantly recognizable thanks to a string of radio hits including "All For You," "Change Your Mind," "Happy," “Champagne High,” and others. Over the last 15 years, he and the band have been prolific in the studio and at live shows. Jeff Coffey resided from May 2016 to January 2018 as the lead tenor vocalist and bassist for the multi-platinum selling, Rock ‘n’ Roll Hall of Fame group Chicago. After leaving Chicago, he then began touring as bassist for Rock 'n' Roll Hall of Famer Don Felder (formerly of The Eagles). With 4 solo albums under his belt, his songs are very relatable and bridge the gap between Pop, Rock and Country. Many songs have made it to the Top 20 on the FMQB AC/40 Charts and have been featured on numerous TV shows on several major television networks such as NBC, MTV, CMTV, FOX, E! Network, HGTV, Travel Channel, A&E, Bravo and the CBS Macy's Thanksgiving Day Parade. Jeff continues to write and record new music, releasing his 4th solo studio album This Time Around in April of 2021. Come out and see him perform live in a city near This is a VIP seating and Meet & Greet Seating only event. Tickets starting at just $15 in advance, $20 stage area and $65 Meet & Greet! Food Trucks and beverages will be available. Free parking in the Altamonte Mall parking lots.
Official Festival Website: https://go.evvnt.com/976260-0