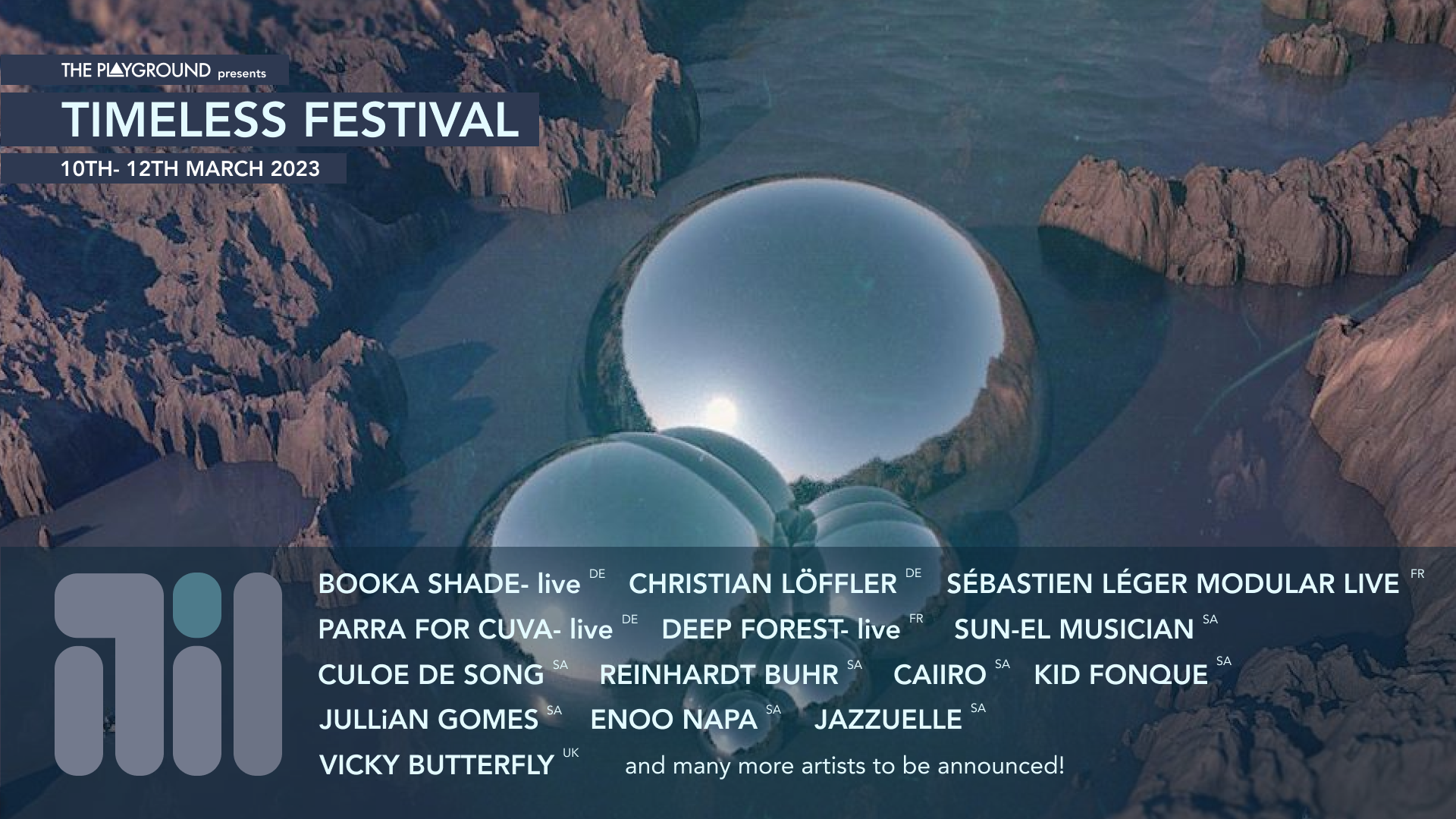 THE PLAYGROUND is pleased to announce the launch of their inaugural festival in Cape Town, South Africa between the 10th and 12th March 2023 to be hosted at the foothills of the Greyton mountainscape on Elandskloof Farm.  Behind artists such as Ed Sheeran, Ben Howard, Crystal Fighters, Franz Ferdinand, FKJ, Pendulum, Steve Aoki among others, and recognised as one of the UK’s top promoter driving forces across the last 14 years, The Playground has hosted events at London's top venues and won numerous accolades from The Guardian, Time Out, and NME Magazine to mention a few, with DJ Mag naming them "One of London's most audacious music forces". The 3 day camping festival is set to bring some of the most influential and groundbreaking acts to one of the most idyllic settings in South Africa. Tickets are limited so grab early birds before they sell out.  ?BOOKA SHADE- [LIVE] Berlin-based duo Booka Shade have carved out a reputation as one of the most celebrated electronic acts to come out of Europe over the past two decades. Since their break-through performance at Sónar in 2005, the pair has earned huge recognition with their innovative live shows. They have opened for Depeche Mode, and headlined stages at Coachella, Glastonbury, Rock Werchter, and Red Rocks just to name a few. 20 years, dozens of EP’s and 6 albums later, Booka Shade have become more than a household name, they have become synonymous with the spirit which drives electronic music and have set a precedent to which electronic music is still held to today. ?CHRISTIAN LÖFFLER- [LIVE] German deep-house producer Christian Löffler specialises in emotive, melancholic music that feels isolated yet strangely relatable. The producer has performed alongside notable acts like alt-J, Bonobo, The Glitch Mob, JUNGLE, Noisia, Nick Murphy fka Chet Faker, Son Lux, Axwell ? Ingrosso, Hardwell, and ZHU to name but a few. ?PARRA FOR CUVA- [LIVE] German-born producer Nicolas Janco aka Parra for Cuva has released a string of albums, EPs, singles and remixes including his remix of Chris Isaak’s ‘Wicked Games’ released by Spinnin’ Deep which reached #1 in the UK Dance and #6 in the UK Singles charts. Since May 2013’s release of debut EP ‘Fading Nights’ has risen to prominence with a catalogue of slow, well-crafted and melody-laden electronica.  ?SÉBASTIEN LÉGER MODULAR LIVE (Performing the live set for the first time in SA) is a French house DJ and producer. His singles ‘Hit Girl’, ‘Hypnotized’, and ‘Aqualight’ have become hit dance singles played in clubs across Europe. In March 2011, Magnetic Magazine placed his track "Firefly" at The 15 Best House Tracks of February 2021. ? DEEP FOREST- [LIVE] Grammy Award winning act Deep Forest embarks from France to South Africa to play their debut show in South Africa. A viral sensation in the 90’s for groundbreaking music production with the signature anthem “Sweet Lullaby” instantly opened the world stage for the band. Their associated first album became a huge success and gained gold, platinum or double-platinum status in numerous countries like Australia, France, Germany, Great Britain, Japan or the United States. In 1995 Deep Forest won the prestigious Grammy Award for their album Boheme. They were the first French artists to win a Grammy Award and to this day, they only share this honour with Daft Punk. With the distinct ethnic-driven sound of Deep Forest, Eric Mouquet belongs to the few unique pioneers of electronic music. His highly recognizable sounds defined the concept of world music and shaped the all-new sound of ethnic-electronica.  ?  SUN EL MUSICIAN - Sun-El Musician is a rare and unique South African producer, who is known and loved country wide, not only for his unique sound, but for his ‘golden ears’ in scouting, producing and signing phenomenal South African voices to his label El-World. Sun-El Musician is known for his humility, profundity and the movement he has created in building the Afro-house sounds. ?  CULOE DE SONG - Born in the northern parts of South Africa’s east coast, Culoe De Song's serious music career began in early 2007 when he featured in Black Coffee’s second offering, Have Another One, with a song entitled “100 Zulu Warriors”. Culoe produced a number of projects that gained him international recognition and performed alongside international acts such as Rocco, Manoo, Black Coffee, Vinny Da Vinci to name a few.  ? REINHARDT BUHR [LIVE]- makes use of a live looping pedal on which he records his spanish guitar, electric cello, electronic drums and australian didgeridoo's building layer upon layer until it sounds like you are listening to a big instrumental orchestra, creating rhythms and vibes that creates restlessness in your body. More Info. here: https://fb.me/e/2y0J8WP9I
Official Festival Website: https://go.evvnt.com/1299113-2