Valley Health Business at the Bloom

Valley Health Business at the Bloom 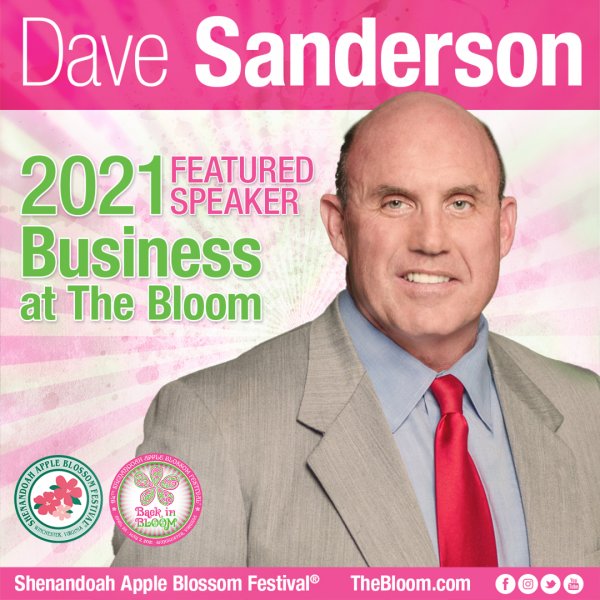 The Shenandoah Apple Blossom Festival® is pleased to announce that Dave Sanderson will speak at the Valley Health Business at the Bloom event on April 28, 2021 at the Frederick County Fairgrounds.  Sanderson recently visited Winchester to launch his new book, God Gives You The Lesson When You Are Ready.

On January 15, 2009, Sanderson had a life-changing experience onboard US Airways Flight 1549 when the flight crashed into the Hudson River en route from New York City to Charlotte, NC, often referred to as “The Miracle on the Hudson.” Dave’s book, Moments Matter, details the lessons learned from the Miracle on the Hudson and how one defining moment can create a lifetime of purpose so you can create your own flight plan for your future!
After nearly thirty-five years in sales and sales leadership with roles in companies such as ADP, Peoplesoft, KPMG and Oracle, Dave founded his executive coaching and personal leadership firm Dave Sanderson Speaks International in January  2014.  In 2018, Sanderson was named one of the top 100 Leadership Speakers by Inc.com.  Dave is a sought-after International speaker, he works with established and emerging leaders to help them find their DISTINCT ADVANTAGE, aligning with their purpose through employing their personal leadership skills, igniting their performance through focused execution, resourcefulness and gratitude.
Dave hosts a daily show on the Alexa platform on Amazon through his Daily Flash Briefing, “Voice of Personal Leadership,” sharing lessons and strategies on personal leadership he has learned and employs so others can be inspired to utilize their personal leadership skills to become the servant leader we all are meant to be.
Sanderson grew up in Frederick County where he graduated from James Wood High School.  Dave continued his education and is an alumnus of James Madison University in Harrisonburg, VA.  Dave and his wife Terri reside in Charlotte, NC and they have four children: Chelsey, Colleen, Courtney and Chance.

The Festival is excited to introduce Dave Sanderson as our guest speaker for next year’s 94th Festival.